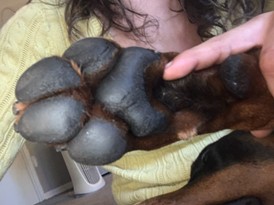 So I had noticed my puppy’s paws had become cracked and dry as he grew up, and various minor adventure injuries to his inner wrist pads had caused them to have poorly defined scarred borders, where the fur and paw pad meet. My poor pup began to lick his paws obsessively at bedtime. We go on trail runs every week and live in a more rural area, and we get some weather extremes (110F summer weeks and 30F winter nights). I used to live in Alaska so I figured anything designed for that type of weather and husky mileage would be good for my dog and I was NOT disappointed.

I’ve been using this Musher’s Secret for about a month now, applying every few days, and I am super impressed with the results. Immediately paw pad color and texture was improved, and over time (in photo, 5 weeks so far) the depth of the cracks in his paws has greatly reduced, the borders where fur meets pad are healing, and they just look so much better cosmetically. I can tell they are causing him less pain/irritation now too because he doesn’t lick his paws neurotically any more. He will lick the wax after application but it’s all nontoxic good stuff and I can redirect his attention; he’s not obsessed with licking the way he was when his paws were too dry.

This stuff has not stained or left any noticeable residue around my house or on my clothing. It goes on easily and invisibly, skin soaks this stuff up and absorbs it, it smells nice/subtle, and has a viscosity somewhere in between Vaseline and beeswax. Extra bonus: my own hands had been cracked and bloody dry from repeated washing/use of hand sanitizer, but getting this stuff on my own hands when I apply it to my dog has fixed me, too! I’m glad I bought the jumbo size, and I would highly recommend this product to anyone who needs paw healing and protection.

Ever hear of "bikejoring"? Well, it's a great way

It's fall, and apples are in abundance again. We t

Puppy playdates are so awesome! Do you take your c

Do you live in the city and want some fresh air? T

Our pets get stressed too, just like their humans.

Cats are so independent, they're generally easy to

Do you live in the city and want some fresh air? T

Our pets get stressed too, just like their humans.

As more and more restaurants are becoming pet-frie

We all love a well-mannered pet and YES, you can h

...dog's paws are more prone to cracking and dryin

Paddle boarding can be an exciting activity to do

Whether it's baseball or soccer, bringing your pet

Walking your dog in the summer heat? Don't forget

Beat the summer heat with some time in the pool. D

Just like the summer heat, cold temperatures can a

Planning to bring your furry friend on an adventur

Whether it’s hiking, backpacking, camping, or just a day at the beach, be prepared with all your dog’s essentials.

Enter your name and email below to snag your FREE copy.
We’ll send it right to your email inbox!

We love helping our pet parents help their pets!
Please enter your question(s) below, and a member of the
Musher’s Secret team will reply as soon as possible!

We love hearing from you guys, so please fill out the
form below to join the Musher’s Family!

DO YOU LOVE MUSHER'S SECRET TOO?

We love hearing your stories and would love to showcase your experience (and pet pics) here.